His name is Fujie Wang, which is  王 福 杰 in Chinese.

The FBI says he's a 32-year-old hacker who has been breaking into U.S. business computer networks across multiple industries.

And now the FBI has given him his own wanted poster: 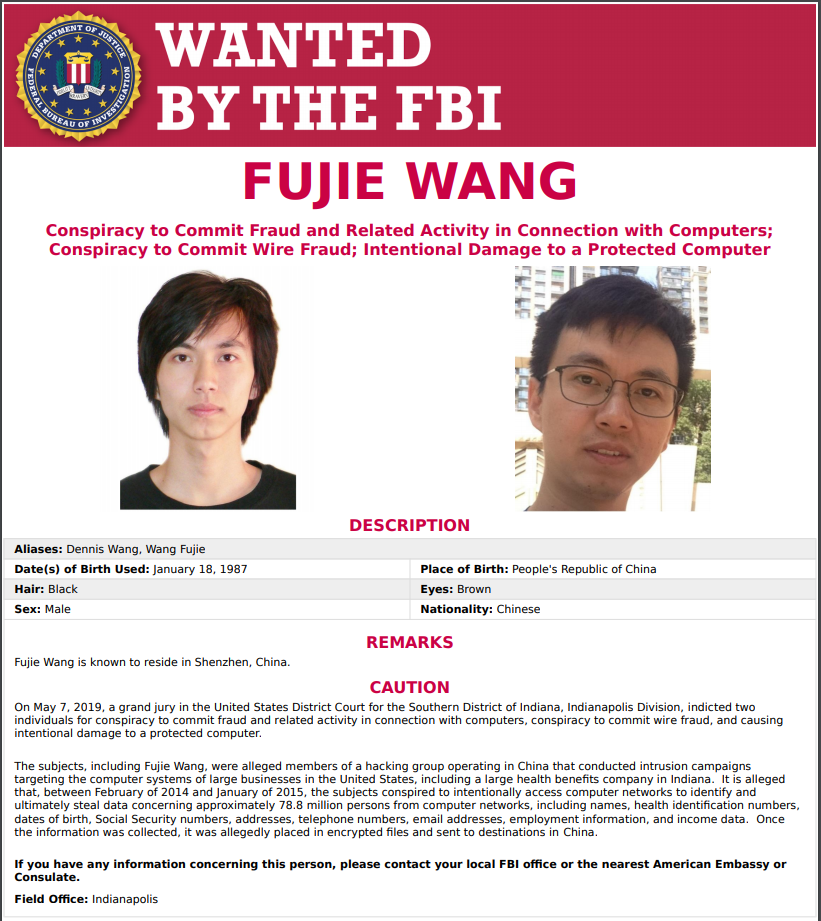 Fujie Wang's wanted poster is part of a grand jury indictment in Indianapolis announced by the U.S. Justice Department.

The indictment reveals that Wang was part of the Chinese-backed hacking group that stole 78 million records from Indianapolis-based health insurer Anthem, Inc.

The indictment reveals the following Chinese hacking methods that worked successfully against Anthem:

Wang is accused of registering and controlling domains that made this operation possible.

FBI reveals: Anthem reacted the way all organizations should

Along with the indictment, the FBI says the case was made possible by Anthem's decision to work with them:

"Anthem's cooperation and openness in working with the FBI on the investigation of this sophisticated cyber-attack was imperative in allowing for the identification of these individuals. This also speaks to the strong partnerships the FBI has with the private sector, as well as the tenacity and global reach of the Bureau," says Special Agent in Charge Grant Mendenhall.

And greater private-public partnerships around cybersecurity is a frequent topic of discussion at our regional SecureWorld conferences, fueled by our partnership with InfraGard.

Fujie Wang is believed to be living in Shenzhen, China, for now, out of reach of U.S. laws and the FBI. Read the full indictment.

However, his indictment is clearly part of a more aggressive stance toward those who hack United States organizations and government agencies.