We just read the complete statement about the investigation into the deadly December 2019 shooting at the Pensacola Naval Air Station.

That villain is tech giant Apple.

What did the U.S. Attorney General say about Apple?

The last few sentences of Barr's speech on the shooting investigation explains that the shooter had two iPhones on him during his killing spree. Justice Department photos show the suspect shot one of the phones and damaged the other one. 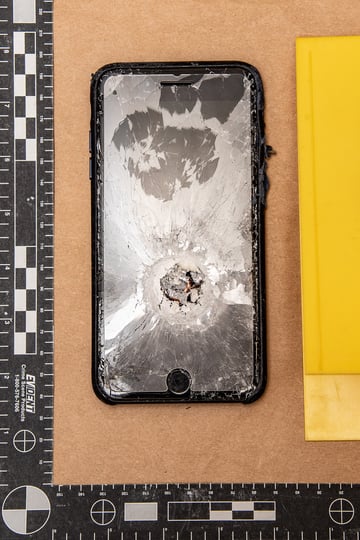 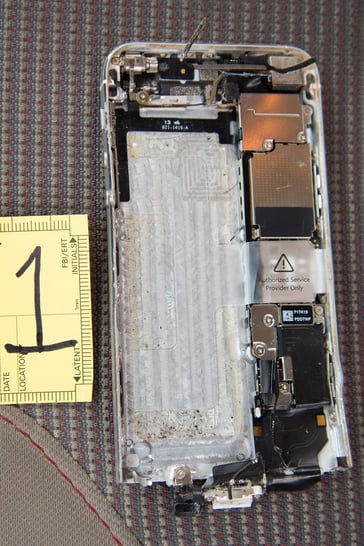 Now, the FBI and the U.S. Department of Justice want to know what's on those Apple devices.

Here is the complete statement by Attorney General Barr, including everything he said about Apple:

"Within one day of the shooting, the FBI sought and received court authorization based on probable cause to search both phones in an effort to run down all leads and figure out with whom the shooter was communicating.

During the gunfight with first responders, the shooter disengaged long enough to place one of the phones on the floor and shoot a single round into the device. It also appears the other phone was damaged.

Our experts at the FBI crime lab were able to fix both damaged phones so they are operational.

However, both phones are engineered to make it virtually impossible to unlock them without the password. It is very important to know with whom and about what the shooter was communicating before he died.

We have asked Apple for their help in unlocking the shooter's iPhones. So far Apple has not given us any substantive assistance.  This situation perfectly illustrates why it is critical that investigators be able to get access to digital evidence once they have obtained a court order based on probable cause. We call on Apple and other technology companies to help us find a solution so that we can better protect the lives of Americans and prevent future attacks."

This is the kind of language we've seen repeatedly from law enforcement in the United States as well as the Five Eyes nations.

What did Apple say in response to the AG criticism?

"We reject the characterization that Apple has not provided substantive assistance in the Pensacola investigation. Our responses to their many requests since the attack have been timely, thorough and are ongoing.

Within hours of the FBI's first request on December 6th, we produced a wide variety of information associated with the investigation. From December 7th through the 14th, we received six additional legal requests and in response provided information including iCloud backups, account information and transactional data for multiple accounts.

The FBI only notified us on January 6th that they needed additional assistance—a month after the attack occurred. Only then did we learn about the existence of a second iPhone associated with the investigation and the FBI's inability to access either iPhone. It was not until January 8th that we received a subpoena for information related to the second iPhone, which we responded to within hours. Early outreach is critical to accessing information and finding additional options.

We are continuing to work with the FBI, and our engineering teams recently had a call to provide additional technical assistance. Apple has great respect for the Bureau's work, and we will work tirelessly to help them investigate this tragic attack on our nation.

We have always maintained there is no such thing as a backdoor just for the good guys. Backdoors can also be exploited by those who threaten our national security and the data security of our customers. Today, law enforcement has access to more data than ever before in history, so Americans do not have to choose between weakening encryption and solving investigations. We feel strongly encryption is vital to protecting our country and our users' data."

This is the type of thing we've heard repeatedly from Apple. And we heard a similar sentiment (to that final paragraph) last year at SecureWorld Boston from cybersecurity thought leader and author Bruce Schneier:

"They [FBI and NSA] have this weird definition of security which means security from everyone except them, which we as technologists can't actually build. And they are pushing for insecure protocols at the same time they're complaining about lack of security."

President Trump also jumped into the conversation on Twitter this week:

"We are helping Apple all of the time on TRADE and so many other issues, and yet they refuse to unlock phones used by killers, drug dealers and other violent criminal elements," Trump tweeted.

There is more to come in this ongoing encryption and privacy debate, we are certain of that.