The U.S. electrical grid provides the country the power to enjoy all the luxuries of modern life and technology.

The increased connectivity brought on by the Industrial Internet of Things (IIoT) allows for more real-time monitoring and adjustment of power, but with those benefits also comes greater risk.

The reliability of the grid has become a topic of greater national interest. The recent SolarWinds incident has highlighted the importance of securing critical infrastructure in the U.S., including the electricity grid.

The U.S. Government Accountability Office (GAO) has released a report, Electricity Grid Cybersecurity, detailing concerns with the cybersecurity of the grid in the U.S. and what should be done to ensure its security in the future.

[RELATED: How a Hacker Tried to Poison a Florida City]

The electrical grid essentially has three functions: generation, transmission, and distribution. The GAO report notes that the distribution systems are increasingly vulnerable to cyber attacks, but the scale of potential impacts remains unclear.

It says the increased vulnerability is partly due to the introduction and reliance on monitoring and control technologies. Here are some examples from the report:

It also says the increased vulnerabilities are compounded for distribution
systems because of the size and dispersed nature of the systems, which
present a large attack surface.

How do hackers gain access to industrial control systems?

On page 14 of the report, the below graphic is included to show how a hacker might gain access. 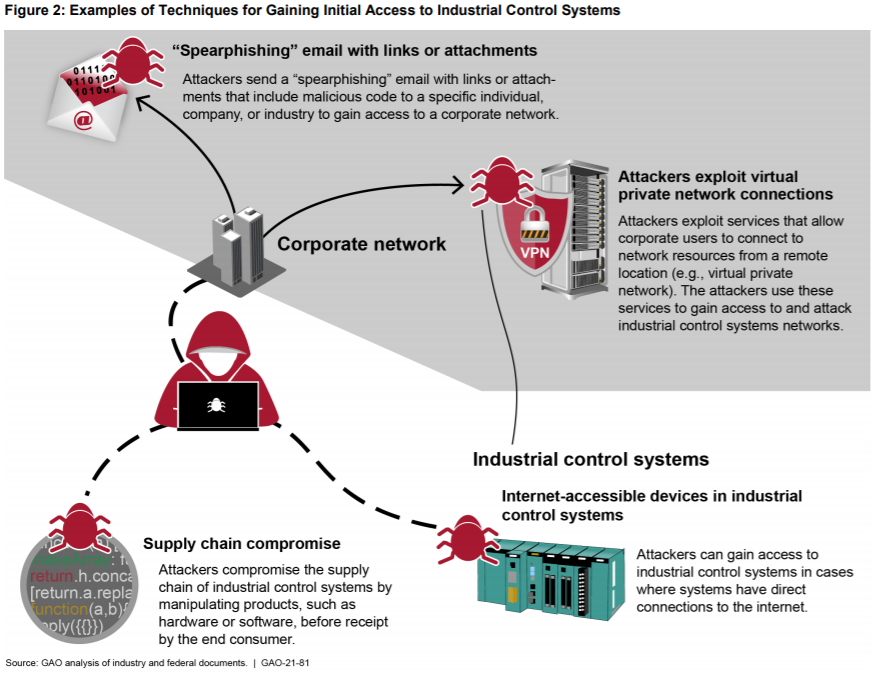 After gaining access, attackers will use tactics such as execution, evasion, and lateral movement for the purpose of positioning themselves to manipulate or interrupt industrial control systems.

The report states that vulnerabilities in the grid's industrial control systems might come from the following factors:

For more information regarding the cybersecurity of the U.S. electrical grid, read the GAO report.